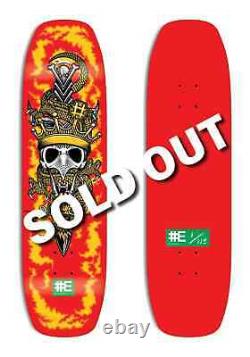 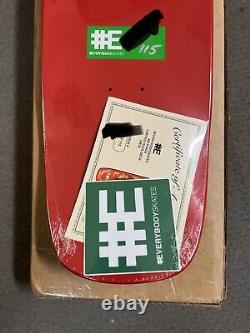 BRAND NEW NUMBERED SERIES LIMITED EDITION #EVERYBODYSKATES. Comes with Certificate of Authenticity. 8.25" X 32.25". Board may have minor imperfections due to production process. In 1978, a mechanical engineer who had developed new skateboard products teamed up with one of the most popular skaters of the era.

George Powell and Stacy Peralta created Powell Peralta and immediately began retooling how skateboard products were made and marketed. George, who had started developing products in his garage and kitchen oven, went on to invent innovative equipment such as double radial Bones wheels, named for their unique whiteness, and trend setting skateboard decks.

Stacy recruited the skaters and handled marketing along with his longtime creative cohort Craig Stecyk III. Rejecting the expected action shot marketing, they used their young team to create esoteric images conveying the culture's sarcasm and disenfranchised dark humor. While spitballing about his stable of skaters, Stacy commented that he never wanted to call them a "team, " a label that invited all kinds of jock baggage. Craig shrugged and simply said, Bones Brigade. Powell Peralta reinterpreted a military motif, warping it with pioneering skateboard graphics more suited to biker gang tats than decks.

As great a skater as Stacy was, his scouting skills surpassed any celebrated onboard skills. By 1984, Tony Hawk, Rodney Mullen, Steve Caballero, Lance Mountain, Tommy Guerrero and Mike McGill compiled the most competitively dominant skateboard team in history.

At the time, skating needed all the help it could get. The 1970s "fad" that swept the country after the invention of the urethane wheel had deflated embarrassingly by 1981. Remaining participants' social status ranked below the chess club. Powell Peralta averaged an anemic 500 monthly board sales and Tony Hawk once received a royalty check for 85¢. To increase brand awareness and grow skateboarding, Stacy produced and created a new Bones Brigade video every year, showcasing his crew's varied personalities and invented maneuvers.

The videos routinely featured riders crawling out of sewers, skating abandoned pools and back alleys, bombing desolate hills-essentially shredded an apocalyptic world hidden to most non-skaters. The dearth of skateparks forced enthusiasts to DIY it, triggering a wooden ramp revolution. Endemic brands had started their own magazines and for the first time skaters controlled every aspect of skateboarding. The Search for Animal Chin. Which remains the most successful skateboard video of all time. But the activity's cyclical nature reaffirmed itself by the end of the decade and skateboarding descended back to the faded fad category. The industry broke apart as zeros dropped off checks and most top pros drifted away in search of second jobs.

Powell Peralta dissolved over the owners' business differences and Stacy left to pursue filmmaking in Hollywood. Almost all the core Brigade members split and started their own skateboard brands just like their mentor had in 1978.

George regrouped and continued making skate products under the Powell and Bones banner. Twenty years on, the Brigade all remain in skateboarding. Although they've succeeded in separate endeavors, they continue to be bonded together as veterans of a culture war. Tony Hawk, Rodney Mullen, Lance Mountain and Steve Caballero remain skate stars while Tommy Guerrero runs a skate brand and Mike McGill owns and operates one of the most successful independent skate shops in the country. This item is in the category "Sporting Goods\Outdoor Sports\Skateboarding & Longboarding\Skateboard Parts\Decks".